Improving child nutrition when school's out

Although thousands of children depend on nutritious free and reduced-price meals and snacks at school for nine months out of the year, only a fraction of eligible children in Ohio last year participated in a Summer Food Service Program, the federal program that helps children get the nutrition they need throughout the summer months. A lack of adequate nutrition at any time can be extraordinarily damaging to a child’s health, growth, development and their ability to succeed during the school year.

OASHF recently hosted a summit with SFSP providers and partners. More details about the Summit are in our news release, or check out the articles and video below for coverage of the event.

Kids get hungry in the summer, too. But when school lets out, the number of youngsters taking advantage of government-paid free-meal programs drops by about 80 percent. (Click here to read the story in the Columbus Dispatch.)

A summit held on Monday brought Ohio leaders together to talk about how to make sure low income children get nutritional help all year, not just when school is open. (Click here to watch the video from the Ohio News Network.)

Tax season is upon us! Ohioans with household incomes under $60,000 can get help filing income taxes through The Ohio Benefit Bank, a program of the Ohio Association of Second Harvest Foodbanks. To find free tax assistance near you, use this map to search for the nearest Ohio Benefit Bank site or tax clinic event, or call 1-800-648-1176 or visit www.ohiobenefits.org for more information. 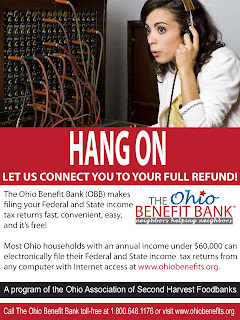 Tax season is quickly approaching and thousands of Ohioans will soon begin filing to ensure they receive their refunds quickly. To help taxpayers save a little extra money this year, the Ohio Association of Second Harvest Foodbanks is once again helping moderate- and low-income Ohioans obtain free federal and state income tax assistance, while also identifying if they are eligible for other benefit programs.

To file your taxes online, or to locate an Ohio Benefit Bank counselor in your area to assist you for free, visit www.ohiobenefits.org or call 1-800-648-1176.

“At least one in every four taxpayers eligible for the Earned Income Tax Credit fails to claim the credit,” said Jason Elchert, OASHF deputy director. “The EITC could put more than $5,800 into the pockets of eligible Ohio taxpayers. This is money that taxpayers can use now to make their lives a little easier or money they can put away for a rainy day.”

It's never too early to get ready for Summer! Right now is a great time to learn more about the Summer Food Service Program (SFSP), a federally funded nutrition program for children over the summer months, when school meals are not available.
The Ohio Association of Second Harvest Foodbanks and the Ohio Department of Education invite you to join us at the upcoming SFSP Summit this month!
The event will be held on Monday, January 30, 2012 at the Mid-Ohio Foodbank in Grove City from 10:30 am to 3:30 pm.
RSVP today by clicking here.
The Summit is for SFSP Sponsors and organizations that are interested in learning more about the SFSP and how to participate in their community. The summit will provide a great opportunity to network, share best practices and hear from the experts, including United States Department of Agriculture Under Secretary Kevin Concannon on how to start or expand your program!
While child nutrition programs are available during the school year, many children go hungry during the summer months.  The Summer Food Service Program, which was established to provide children ages 1-18 breakfast, lunch, or a snack during the summer months, operates out of schools, summer camps, park and recreation centers, and churches and community centers in Ohio.
Join us on January 30th to learn more about how you can become involved in the Summer Food Service Program in your community!
Posted by Elizabeth at 1/05/2012

Food Stamps: the safety net that deserves its name


A recent article written by Lizzy Ratner appeared in The Nation early this month and it explores "the food stamp system: decaying, inundated and one of the most unexpectedly effective safety net programs still standing." Read the article here: http://www.thenation.com/article/165169/food-stamps-safety-net-deserves-its-name
Posted by Elizabeth at 1/02/2012

We Are Ohio provides OASHF with $10,000 to help fight hunger

At a time when the number of Ohioans turning to Ohio's emergency food assistance network continues to rise, charitable contributions, such as the $10,000 received from We Are Ohio, have a huge impact in the fight against hunger. Read more about this in our press release on the OASHF website: http://admin.oashf.org/uploads/news/We_are_Ohio_Press_Statement.pdf
Posted by Elizabeth at 12/20/2011

We can't afford hunger in Ohio

Hunger cost Ohio more than $6.97 billion in 2010. But Ohio can make a difference in the debate on how we prevent hunger-related health care costs, lost educational achievement and worker productivity.

We need YOUR VOICE today to make an impact. The Super Committee's deadline to come up with $1.2 trillion in cuts or revenues is this Monday, November 21st.

Call Senator Portman and your congressperson TODAY  if you care about the cost of hunger and the National Service members who give a year of their life to end hunger and poverty in your community.

Any cuts to these programs would be devastating, at a time when a record one in six Ohioans are facing hunger and millions of workers have lost their jobs, their homes, and have seen their families' economic security slip away.

Your calls are making a difference, but continued pressure is needed if we hope to protect these critical programs! Share this alert with your colleagues, supporters and friends. Thank you for caring! Thank you for calling!
Posted by Elizabeth at 11/18/2011

More than 40 people gathered for a Local Hunger Summit on Friday, October 7th at the South Campus of Southern State Community College. Elected officials and staff members from local, state and federal governments, who were in the audience, heard from a panel of service providers and residents from Adams, Brown and Highland Counties.

Pastor Don Young from Christians Across America spoke of the need for food assistance, telling a story of an elderly couple sharing a can of dog food because they were out of food and out of money.

“There are so many families that are just one or two weeks away from being out of food,” said Chuck Aurigema from Area 937 Ministries, echoing how hunger can be hidden but still exist in local communities. “Government, community and business must come together to meet the need”

One example of how the community has responded is Hope Christian Alliance, an alliance of all of the food pantries and soup kitchens in Highland County.

“We are just trying to hold on until we get some jobs down here,” said Curtis Pegram, a founding member of the Alliance. Pegram described how the community is doing everything it can, including planting acres of land with produce to distribute to hungry families.

But it is not enough, he said.

“The food pantry is not meant to be the only source of food” for hungry families, said Pat Mawhinney, Rural Agency Representative for Freestore Foodbank. Mawhinney described increased demand and need in the area, and raised concerns about threats to federal nutrition programs, such as the Supplemental Nutrition Assistance Program, formally known as Food Stamps.

Other residents shared stories of struggle in the area.

Dee Wright works for Bright Local Schools. The school is seeing more children misbehaving because of economic issues hitting home, including more children stealing food from the lunch line for hungry siblings at home. While the school tries to have programs for needy families, demand often is larger than supply.

“How do we choose which children get help?” asked Wright.

Kathy Grooms operates a Head Start program in Adams County, where she witnesses children eating on Friday afternoon. “They stuff their tummies, knowing that there will be no food” for the weekend, she said.

Julie Wise from the Highland County Community Action Program spoke of seniors who were not eating over the weekend when congregate meals were not served. Wise raised concerns about cuts to the Community Service Block Grant (CSBG), which funds programs for senior nutrition in Highland county. Cuts to CSBG would mean that fewer older Ohioans in Highland County would be able to get meals.

Rhonda Holbrook from the Adams Brown Counties Economic Opportunities spoke of a man who had asked for food assistance and admitted that he had not had the insulin that he needed to manage his diabetes for two weeks.

“This is what is happening,” stated Jennifer Howland from the Highland District hospital. She shared a story of a patient who was on chemotherapy, but was living in a trailer without running water or electricity.

These are just a few examples of the costs of hunger that we are already paying for, said Nora Nees, Director of Child and Senior Nutrition at the Ohio Association of Second Harvest Foodbanks. She referred to a recent study that quantified the costs of hunger. On average, each household pays $1,548 for the costs of hunger including increased medical costs, decreased worker productivity and the cost of private charity, each year.

Lisa Tumbleson-Davis from the Adams Brown Counties Economic Opportunities spoke about the need for free tax services and application assistance for individuals in the local community. “People do not want to have to ask for help,” Tumbleson-Davis stated, but with The Ohio Benefit Bank™, Tumbleson-Davis and other community members can assist families in free tax filing and private benefits applications.

Teresa Carr from the Adams County Senior Citizen’s Council spoke about her concern for her local community, “I thought this would be a great place to raise my kids,” she stated. Carr was concerned about the number of older adults who need utility assistance through the Low Income Home Energy Assistance Program or LiHEAP, and the vulnerability of those programs in the federal budget. Carr also spoke of older Ohioans who were at risk of losing their homes to pay for medical bills, “they have to give up so much just to survive.”

Ralph Jennings, Brown County Commissioner thanked the audience for attending and speaking out – stating that the summit was an example of how to communicate with elected officials. Representative Danny Bubp from Ohio’s 88th House district recognized the need and challenges facing the local community, including unemployment and declining incomes. Danielle Nameth, a representative from Senator Sherrod Brown’s office was appreciative of the work of the individuals and agencies at the summit and spoke of the Senator’s support for emergency food programs, “It’s not spending, it’s an investment” stated Nameth. Also present to listen to the local community was Stephen Carraway, from Congresswoman Jean Schmidt’s office.

The event was previewed in the Highland County Press: http://highlandcountypress.com/Main.asp?SectionID=2&SubSectionID=74&ArticleID=9842
Posted by Elizabeth at 11/16/2011
Labels: policy and advocacy
Older Posts Home
Subscribe to: Posts (Atom)

Looking for our old blog sections? They're still here!